I had a wonderful dinner at  Cuisine[s] Michel Troisgros in Tokyo.  Maison Troisgros is a Michelin Guide three-starred restaurant in Roanne.   Maison Troisgros has had the honor of being listed as a three-star restaurant in the Michelin Guide for 48 years (since 1968).  Outside of France, only Hyatt Regency Tokyo and Odakyu Department Store provide to deliver and maintain traditional French cuisine with the spirit of Troisgros.  I had their 10th anniversary celebration dinner of the founding of Cuisine[s] Michel Troisgros, Tokyo and Chef Michel Troisgros was visiting Tokyo and celebrating their 10th anniversary with us.  I met Chef Micheal Troisgros at JCI World Congress, Kanasawa, last year.He told that his grandfather who managed the Troisgros family restaurant business, used to say “ask yourself, and answer your own question. Think what actions you need to take to differentiate ourselves from other restaurants”.  He also told us that important things to get a lot of inspiration, are be bathed in the beautiful sunlight and feel the flow of the day and season.Furthermore, his uncle, the chef of the Troisgros restaurant, told him to keep having “curiosity about something new” “be patient” “have courage” “to turn your eyes upon the world” “the feelings from a child's perspective”.
Cuisine[s] Michel Troisgros’s 10th anniversary celebration dinner was wonderful.  They are trying to create an emotional cooking that touches our heart.  That is their cuisine as art and like a modern painting, no explanation is necessary.

The 10th anniversary celebration dinner course contains 11 dishes.  They provide a theme for each dish, for example, “tolerance” for starter and “respect” for main dish.  I could feel “ tolerance” when I had tomat caramélisées, tartelette mushrooms & hazelnut as a starter, and could feel “respect” when I had lamb brûlée as a main dish.
They combined Japanese and French ingredients and make a new creation on the plate.  I love the dish “clams, konbu（sea tangle）and mushroom with sake jelly.
It gave me an extremely delicate texture of taste and rich flavor of sake, mushroom and konbu to expand in my mouth. 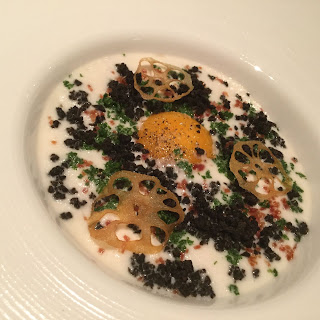 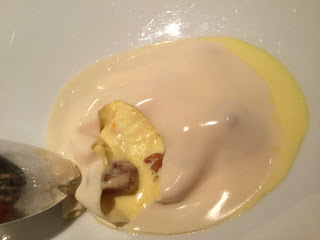 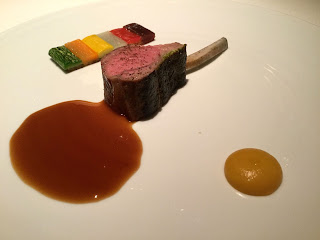 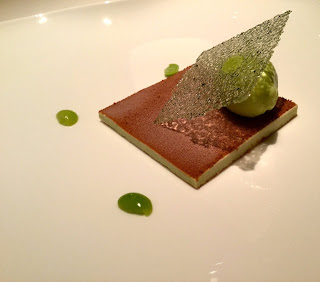