Everyone who visits has been faced with vegemite.

I first encountered vegemite in 1983, when I was an exchange student in .

The jar was bright and cute with its yellow cap and red label. When I opened it, I saw a dark brown, almost black paste. "It looks like chocolate," I thought, "hmm...yum!" I immediately tried it.

I was so surprised to discover it wasn’t sweet at all but salty with a very, very unusual taste.

In fact, it tasted awful! "How can people eat this?" I thought. And it seems I’m not the only one who thinks this. Visitors from other countries have had the similar experience. When I was on the bus trip with exchange students from 20 different countries, not one person like it. Vegemite must be the most famous Australian food detested by foreigners.

I too, was once like those 'vegemite-detesting' foreigners. But, then one month into my stay in , it happened - Vegemite turned into my favorite food. How did this happen?

It happened because I was homesick and vegemite became my Japanese comfort food.

One day I was having my breakfast at my host family’s house and was feeling rather homesick but trying to hide it, when suddenly the smell of soy sauce wafted by. I turned in the direction of the smell only to discover my host brother eating a piece of toast with plenty of vegemite on it. Vegemite is more like soy sauce than chocolate? As soon as I realized the truth of this, it changed my experience. Vegemite became delicious!

I began to see further evidence of the connection between vegemite and soy sauce. When my host mother was making curry and fried rice, I found out she would put in a pinch of vegemite to bring out the good flavor, much the same way soy souse is used.

A few weeks after my epiphany, I learnt vegemite also includes the same ingredient as a Japanese popular medicine for the stomach called “Ebiosu”.

More than 25 years have past since I have eaten vegemite in , yet I still love it. Now I buy vegemite at the supermarket here in Japan, and it's always on my breakfast table.

I recommend vegemite on toast with rich butter. 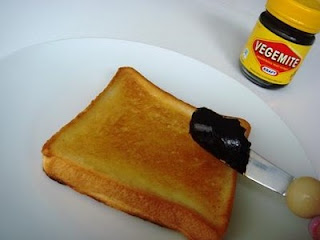